Is Dog Boarding in Aloha right for your Golden Retriever?

Posted on January 10th, 2019 by SafeJourney-admin
Is Dog Boarding in Aloha right for your Golden Retriever?

When someone says “dog”, what pops into your head? If you’re like hundreds of thousands of pet owners in the US, you likely picture a golden retriever. This gregarious breed is the third most popular in the country, and for good reason. If you’re considering getting a pet, learn what you need to know about their behavior, characteristics, and considerations such as dog boarding in Aloha.

Goldies are a big, but not an overly large breed. By way of comparison, the tallest golden retrievers tend to stand only as high as the smallest rottweilers. They have broad heads, large ears, and wide eyes. A golden retriever’s coat is white, yellow or light brown. They have thick, soft fur that usually hangs down but which might also curl.

This is a sporting breed, intended to help in bird hunting. The idea is that they retrieve fowl that you’ve shot. A golden retriever’s exceptional intelligence aids them in their tasks and makes them relatively easy to train. Goldies are prized for their very sociable nature. They are virtually never aggressive, even to visiting strangers. For this reason, they make ideal “family dogs” in households with young children, but poor guard dogs. You can usually place a golden retriever in a home with other pets, both dogs and others, without hostility issues.

With a love of running, it’s not uncommon for golden retrievers to wander off where they shouldn’t go. This can lead them away from home or even into traffic. If you have a yard where you let them play, make sure to set up a fence for their own safety.

Golden retrievers first came from Scotland in the mid-nineteenth century. They’re adapted for the climate of the highlands, which tends toward cold and wet. Sound familiar? Due to their particular waterproof coats and builds, goldies fare very well here in the Pacific Northwest.

A fair number of golden retrievers have problems with elbow dysplasia, which can hobble them up. They need lots of regular exercise, both for behavior control and to keep them healthy. Lastly, more than half of all golden retrievers eventually die due to various cancers. If well-kept, they tend to live to up to around 12 years.

Golden retrievers are full of all sorts of surprises. Here are just a few interesting facts:

Is a golden retriever right for you? 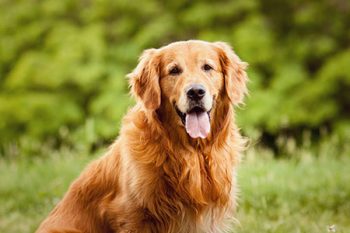 A golden retriever’s need for exercise goes beyond a walk around the block. It requires regular trips to an off-leash park or giving them lots of room in which to run on your property. If you can handle this requirement, owning a golden retriever is a remarkably rewarding experience. Whether you want a goldie for emotional support, as a hunting companion or for any purpose, you’re going to be hard-pressed to find a breed that’s more loyal and dependable.

While a golden retriever’s lustrous coat is long and beautiful, as well as water-repellent, it has a tendency to shed. You can minimize this by giving them a thorough brushing just once a week. If your goldie is an outdoor dog, this won’t be a problem for you.

As much as you love your pup, sometimes life just demands that you travel without them. A large breed dog like a golden retriever is a far cry from a goldfish; your friends can’t just come over and drop a few flakes of food into the water every other day. We can’t state it enough that golden retrievers need space and plenty of time to run around every day. Your best bet for care while you’re away, or just during the workday, is a professional kennel. Since goldies get along well with other dogs, spending a day at the kennel in Portland is a fun experience for them.

If you live in the Portland metro area, Safe Journey is the place of choice to host your pet. We offer all sorts of different plans to suit your individual needs. As dog lovers ourselves, our staff is filled with people who care for your pup nearly as much as you do.

If you need to work long shifts during the day, why not set your dog up with our dog daycare in Portland? They can work out their intense energy so you can relax or maybe take them for a leisurely stroll when you get home. All you have to do to get the ball rolling is give us a call or fill out the contact form on this page so we can get back to you. Your dog serves you well, return the favor with Safe Journey Dog Boarding’s dog daycare in Portland.